The Mochadian alphabet consists of 22 Letters (5 Vowels and 17 Consonants), not counting Accents. In High Mochadian, there is also a more complex feature involving placing an acute accent over consonants to voice them. For example, if the x in Xàkolét (CHAH-KOH-LEHT) were to be voiced, it would be X´àkolét (JAH-KOH-LEHT), and would sound like "Jock-oh-let". You can also use a grave accent to devoice consonants, making v` sound like f, though since most of the consonants in Mochadian are devoiced to begin with, this isn't too useful. Minor modifications to the letters are rarely spoken, they are only used formally. This is what is spoken in Mochadia. 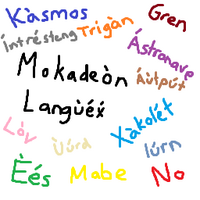 Add a photo to this gallery

Welcome to Mocha's Conworld!
"Brought to you by the internet"
Retrieved from "https://mochafiction.fandom.com/wiki/Mochadian?oldid=9224"
Community content is available under CC-BY-SA unless otherwise noted.